Stop Dreaming and Start Walking in the Spirit of God 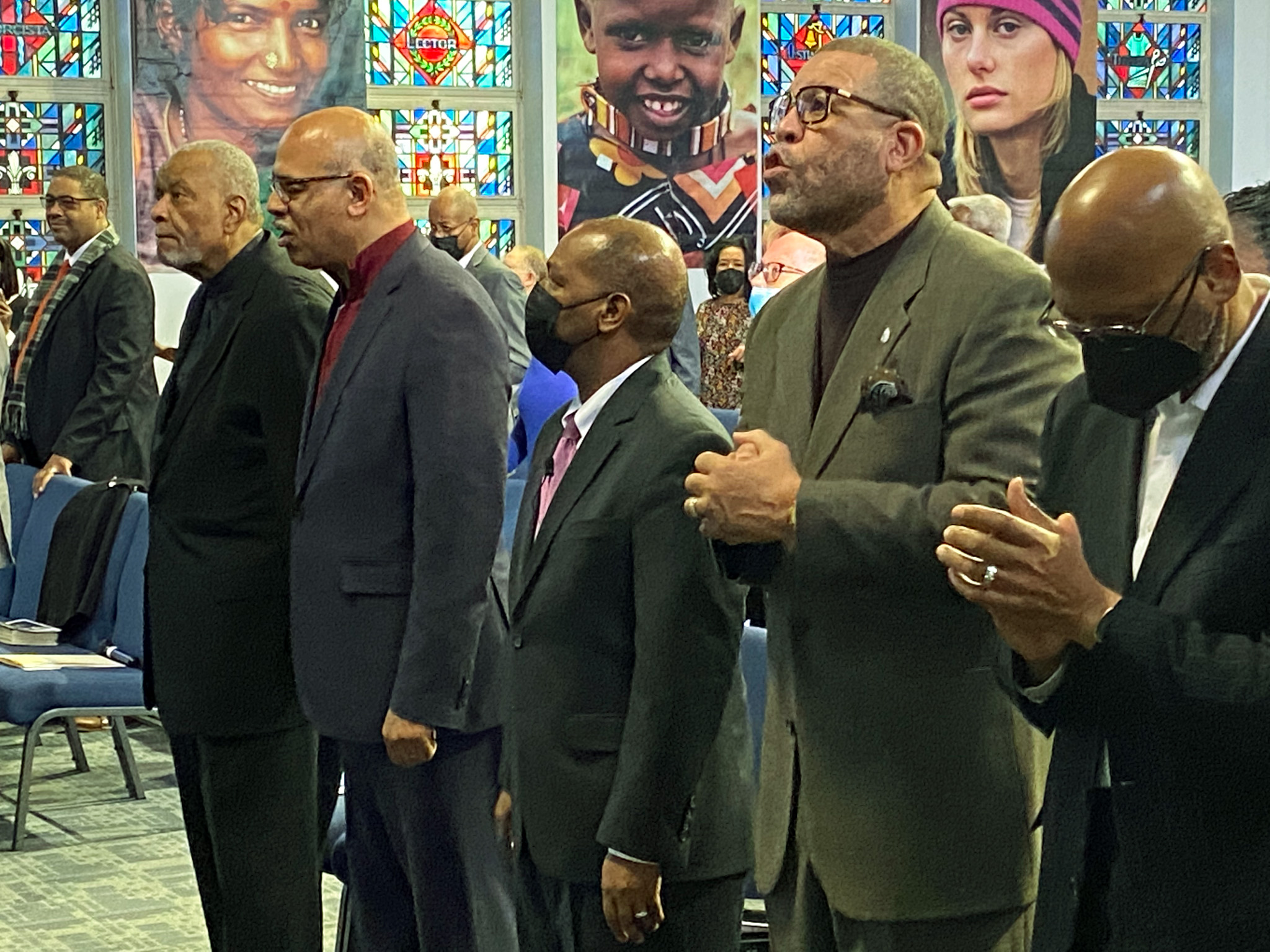 In response to King’s popular “dream” speech, Sterling told listeners, “Stop dreaming and start walking in the power of the Holy Spirit!” 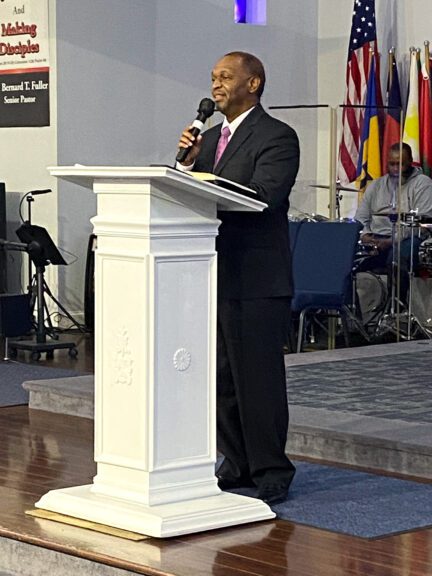 Bucas Sterling III tells attendees to stop dreaming and start walking in the power of the Holy Spirit. (photo by Pastor Harold Dugger)

Sharing about King, Sterling, who also serves as the vice president of the National African American Fellowship, told attendees, “On January 15, 1929, in the throes of the Great Depression was born a male child, Michael Luther King, Jr. He would later change his name to Martin. This child has been credited for changing the world: proof that out of great depression, suppression, and oppression, God can raise up one victoriously.

“Dr. King is known mostly for his civil rights leadership… and he sought to obtain justice in an unjust world for those of color,” said Sterling. “He became known and viewed as the modern-day leader of Black America. I’ve also heard it said the modern-day Moses. This man has been given status as a king. In fact, in many African American homes, his image is aside that of our depiction of the messiah and perhaps John F. Kennedy.

“He was after bringing us — black, white, brown, yellow, Hispanic, Asian, Jew, and Gentile — all together in a sense of oneness that we would be unified in a people and that everyone would receive the justice that was due to them. In a divine-like form, this Dr. King gives an address. In a prophetic-like approach, he speaks to his followers of the prediction of his departure, with expectations of their future in what I call a sermonic-like speech. He calls it “I Have a Dream.” With all respect to him, I want to remind you that it was his dream.

“Let me rewind the clock about 2,000 years, and another male child was born. In the throes of Roman oppression and depression, this child was born, and his name was Jesus. He later would prove that his name could be changed to Immanuel — God with us. Despite all the angelic appearances and the prophetic messages from God, and all the exactness of time and the calendars coming together, he still had to walk through 33 years to prove he was God. And here we are; some still argue whether he was or not. But again, proof that out of great depression and suppression, God can rise up one victorious. His assignment was to come and die for our sins, to redeem us and reconnect us and make us one with Himself. You see the parity.

“On a day like today, I’m going to suggest that our answer is to stop dreaming and to start walking in the power of the Holy Spirit.

“Jesus, like Dr. King, had a message to His followers as he prepared to depart and leave them. He knew prophetically He was getting ready to die, His time was coming, and he has this message he leaves to them that we find so eloquently recorded in John’s gospel, but His message wasn’t a dream. 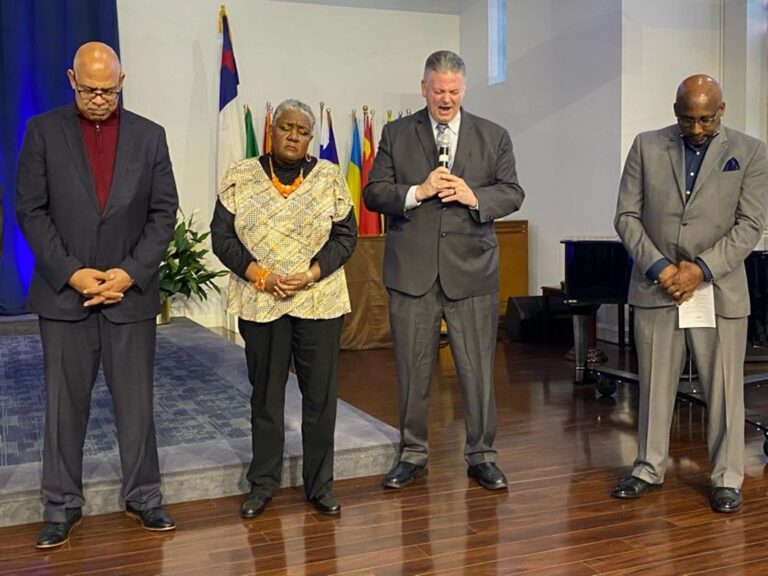 “Jesus says, receive this Holy Spirit. He says when the Holy Spirit comes upon you, you will receive power. This is ‘dunamis,’ dynamite power – the power of the one who stepped out of nowhere, stood on nothing, and began to speak, and because He spoke, everything came into existence. It’s the one who actually scooped up dirt, breathed on it, and dirt became a living being. I’m talking about the power of the one who went to the tomb and said Lazarus come forth, and Lazarus got up with his graveclothes on. You shall receive power, and the power will make you my witnesses. You will be my witnesses in the lost, dark, dying world you will represent me. You will be the light in the darkness, you will be the salt in this blandness, and you will be the ones who flavor this earth. I’ve given you the power to do that.

“But we’re busy dreaming. We’re dreaming a dream of somebody else. With all due respect, that was his dream. The church is failing because we’re still dreaming and not walking in that power.” 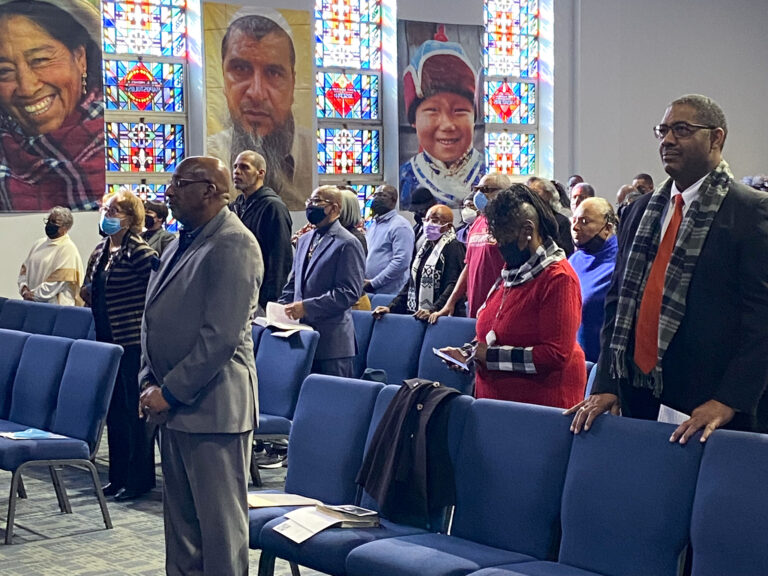 “Preachers have nothing to say except we say what God says, and if we say what God says, then every dead spirit will wake up and pay attention. And if we walk in the power of that spirit, the church will be full, the lost will be minimized, and people will come running to Jesus. Not because we lifted Him up in song but because we lifted Him up in the Word. Because when the Word, which is the sword of the spirit, gets plunged into the heart of lost men and women over and over and over again, instead of killing them, it brings them to life. And it was that power of the Holy Spirit that brought you alive, and quickened your dead spirit, made you alive unto God, and now you have a relationship with God that you, as an earthly, broken, wretched vessel, can talk to the King of Kings and Lord of lords and He will hear your prayer.

“If we would only stop dreaming and tap into that power, we’d see the church of today and the world of today change. Dr. King spoke of a future day and future dream he wasn’t just speaking of a future day and future dream here in America. He was speaking prophetically to eternity. Because in this life, we’ll always have problems with each other, divisions and struggles because of our anti-God nature. Even in church, we don’t agree with each other. The unity we want is elusive. Even when you think you have unity, you don’t.

“He will guide you to the truth. That power is dwelling in us, and if we walk in that power, we will see change happen.”

Sharing another illustration, Sterling shared about a recent truck purchase… After driving it around for a few months “like grandma — nice and easy,” he said an occasion happened that he needed to speed up to move forward. “I hit the accelerator, and I mean I really hit it, and this 5.7-liter v8 gas-guzzling machine slammed me back, and it took off. And I realized the power that I had underneath me. The church, like me, is driving around in ‘eco’ mode with all this power inside of us, but we’ve never pressed the accelerator to access the power we possess, but rather we sit around and complain, ‘oh woe is me, no one coming to my house, no one is coming to my church, nobody wants to get saved, everyone is acting like a fool, what do I do?’ Walk in the power you have. Use the power that God has put in you. It’s not you, it’s God in you. It wasn’t me that moved that truck; it was the power that was in the truck. And if we all agree that the God that is in us is the same God who created the world, is the God who does not change, then He can do what this text says – if you believe in Him, you can do what He did.” Sterling said the reference to greater works does not refer to quantity but quality. Why don’t we believe this?

“Because we’re dreaming another man’s dream instead of walking in the power of the real king.

“All due respect to Dr. Martin Luther King. He ain’t my king. He didn’t die for me. He didn’t leave me any power. Some legislation got changed, but that’s on paper. Jesus changed my name, changed my destination, changed my position with God, and made me one with himself. That’s power. That power is available to us all if we walk in that power.”

As part of the meeting, pastors and other leaders prayed for government, military, media and the entertainment industry, business, education, the church, and the family.

A portion of the meeting was dedicated to sharing about the George Liele Leadership Institute. George Liele was one of America’s first missionaries and the first African American missionary officially honored by the Southern Baptist Convention. In the summer of 2022, a proposal was presented to the Baptist Convention of Maryland/Delaware to launch the institute, which will kick off in September. The Institute is intended to be a premier learning community, developing the head, heart, hands, and habits of African-American servant leaders for global impact as ambassadors of Jesus Christ.

Watch the video of Pastor Sterling’s message below: