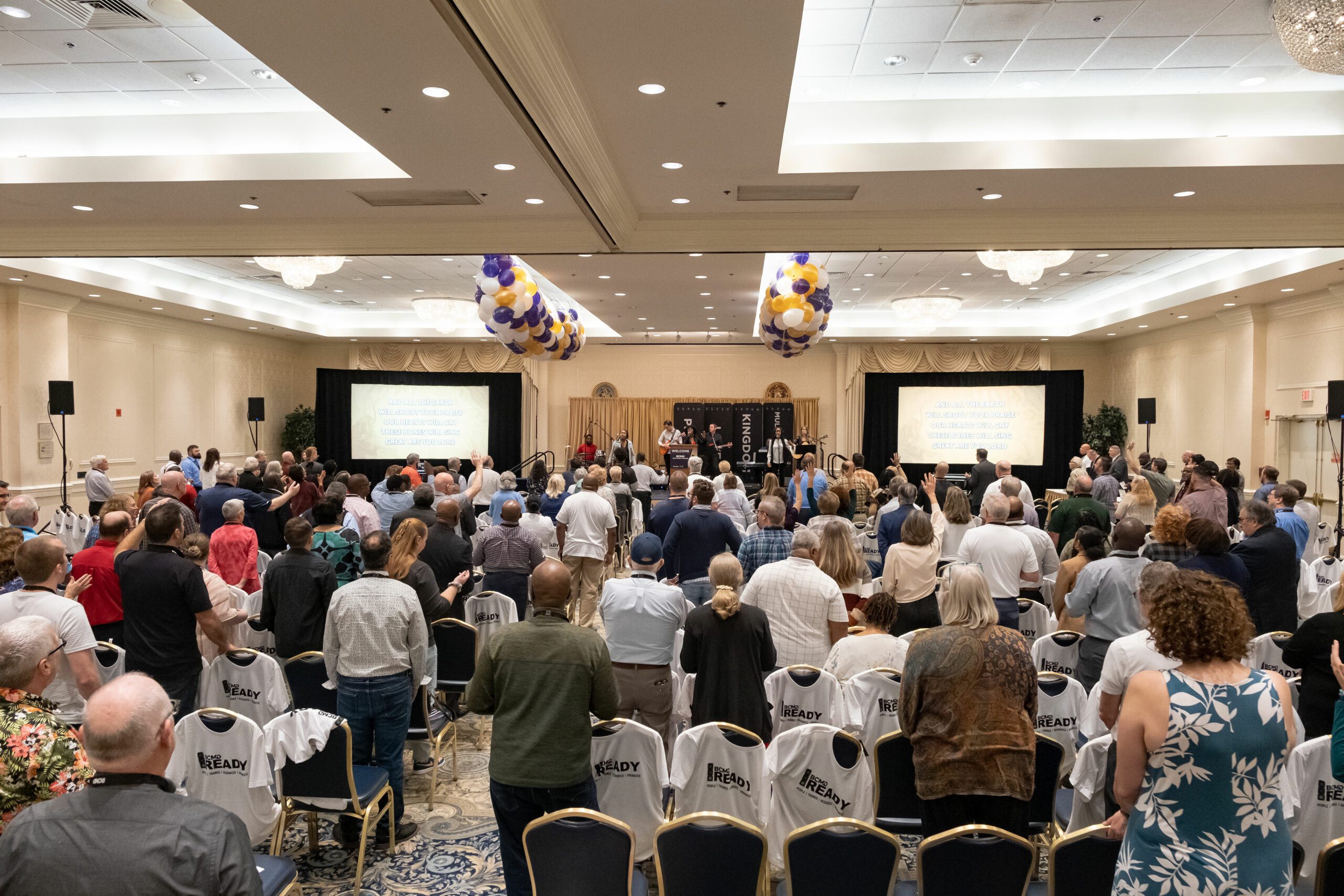 The meeting drew 270 messengers and 71 guests to the beachfront Ocean City Fontaine Blue. A total lunar eclipse in the early morning hours of November 7 provided an interesting metaphor for the convention’s new direction, led by recently called Executive Director Michael Crawford and funded by the 2023 budget. 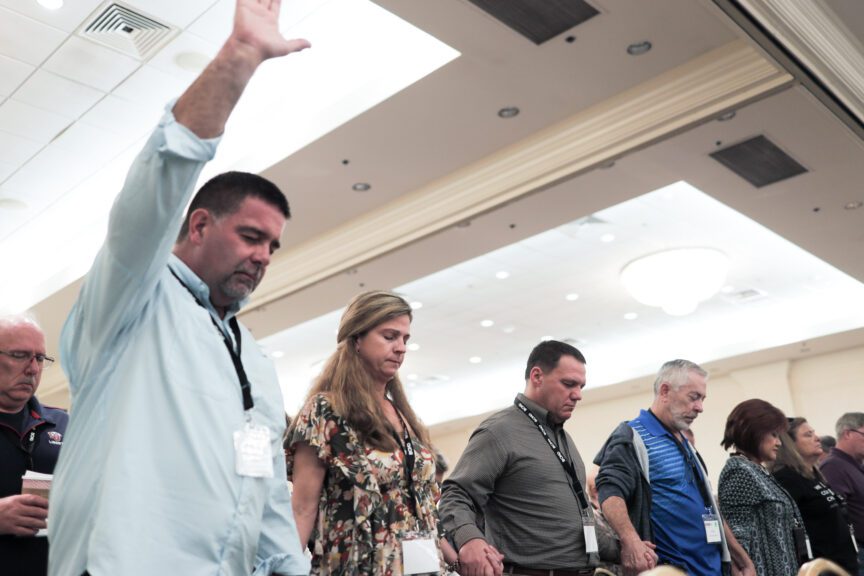 Crawford emphasized the value of Baptist associations. He allocated time during the meeting for the 11 affiliated directors of missions to each share prayer requests and tell how God is working in their associations. Crawford championed the continued need to strengthen relationships and encourage pastors and their wives. Following the meeting, the BCM/D hosted a catered dinner for pastors and their wives, organized by Ministers’ Wives Consultant Somer Phoebus and Women’s Ministry Consultant Melody Knox, who gave special attention to the women, encouraging them in their unique roles and presenting gifts to the ladies. Crawford emphasized BCM/D Ready, a new initiative mobilizing churches through the associations to be prepared for both natural and socio-economic crises. He also highlighted church planting, disability ministries; African American ministries; ministerial counseling; and protecting vulnerable adults and children.

He strongly emphasized the need for continually strengthening collaboration between churches and associations. “What happens if we get really intentional about working together? What if we built on that?” Crawford said, “In the New Testament, there was not one church planted without all the other churches. I would challenge you to read the New Testament and find one Christian or one group that did something by themselves. It never happened.

“The possibility of turning the world upside down still exists, but you can’t do it, and I can’t do it, but WE can do it. If we concentrate together and get serious about intentional cooperation and collaboration, we can do incredible things. So when people ask me what I’m excited about, I tell them it’s about this untapped potential of our collective.” 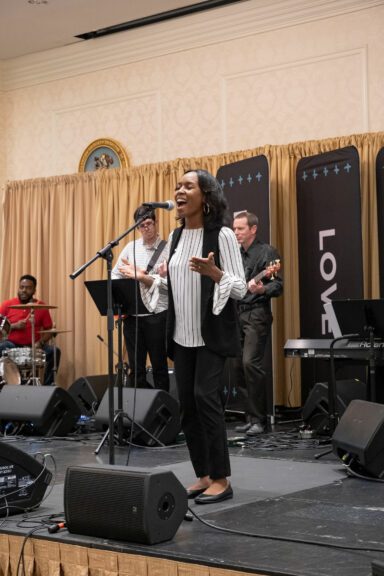 Throughout the meeting, pastors and leaders shared testimonies about ministries to immigrants, disability ministries, BCM/D Ready, collegiate ministry, ministry to women, and African American ministries. Additionally, there were testimonies and reports from the BCM/D’s Sexual Abuse Task Force.

Messengers also approved a constitutional change requiring churches to take steps to protect children and vulnerable adults as a requirement for affiliation — “In order to affiliate with the BCM/D, a local church must seek to protect vulnerable adults and children from sexual abuse in concrete ways which reflect the spirit and theology of Scripture. Disaffiliation will occur when a church is found to be in open and unrepentant beliefs or behaviors that are contradictory to the BFM 2000.”

Speakers throughout the event focused on collaboration, prayer, unity, and suffering.

BCM/D President Glenn Swanson shared a BCM/D three-point emphasis — celebration, communication, and collaboration. “We celebrate for what God has done, brothers and sisters, and what He will continue to do through the churches of the BCM/D. We communicate because we want everyone to hear about those good things and experience the greatest message of all time – the gospel of Jesus Christ, that salvation is found in Christ and Christ alone. We collaborate to lift each other, to pray for and encourage one another, to help each other out in times of need, and to make known that the churches in the BCM/D are not alone. There is strength in numbers. We are indeed better together.” 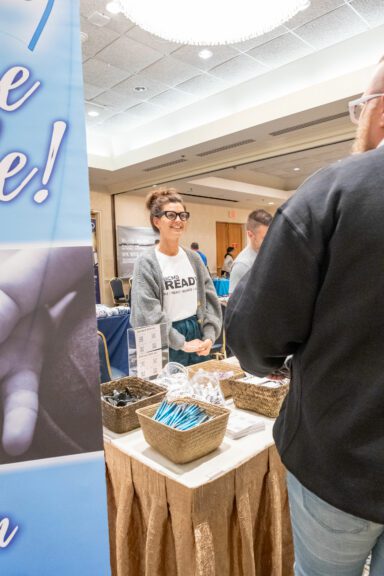 Jeremy Dickson, the pastor of Freedom Church Baltimore and newly elected Baltimore Baptist Association director of missions, encouraged leaders. Ministry is hard work, but God knows what you’re doing, understands, and will reward you. Dickson pointed to Hebrews 6:10, “For God is not unjust; he will not forget your work and the love you demonstrated for his name by serving the saints—and by continuing to serve them.”

Dickson said, “Pastors, pastors’ wives, ministry leaders…God sees your work, and if you hang in there, in due time, God will reward you. There is no amount of applause…award or plaque, no church, state or associational recognition that will ever come close to comparing to those words, ‘Well done my good and favored servant…enter into the joy of your master,’” Dickson said, referring to Matthew 25:23

Dan Hyun, the founder of Village Church, Hampden, Md., echoed Dickson’s statement that ministry is hard, but God is there in the midst. God tells us to call him Abba, an intimate term. He is a good father. The very cries of our prayers are a testimony that God’s grace has worked in our hearts. It assures us that in the midst of a raging storm, Abba is the safe haven with arms open wide to hold us tight when everything seems to be falling apart,” Hyun said.

“When our hearts are filled with terror, when it’s dark, and we can’t see ahead of us when we’ve fallen, a good Daddy doesn’t yell at us. A good daddy holds the child close, wipes the tears, and says, ‘I know it hurts. I know it hurts a lot. I love you.’” 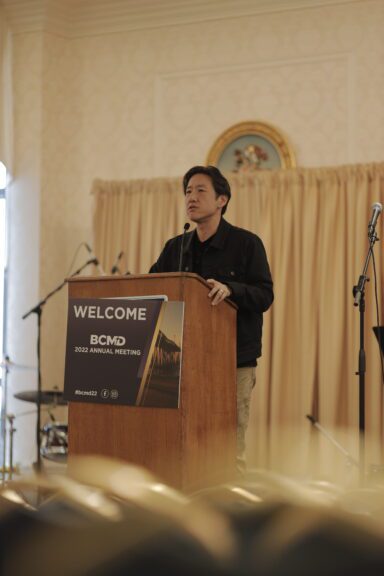 Joel Rainey, the pastor of Covenant Church, Shepherdstown, West Virginia, told messengers and guests the gospel unites us. Referring to Romans 16:21-13, he noted eight believers. “They are all in the room together like we are. They’re sending greetings to Rome.” Rainey called attention to those names — Timothy, Paul’s protege, a product of an interracial marriage involving a Greek dad and Jewish mom; Lucius, a leader from Antioch; Jason, who had risked his life to host Paul in his home; Sosipater, a man who accompanied Paul from Berea to Jerusalem with an offering for gentile churches; and a man called Tersius apparently taking dictation for Paul; Gaius, the host; Erastus, a powerful public official, and Quartus. Tertius and Quartus were household slaves. Rainey said, “We know that because of the absence of any proper name.” In Roman culture, they were referred to as numbers three and four.

“Ministers of the gospel, businessmen and entrepreneurs, benefactors, powerful political leaders, and slaves all in the same room, all calling one another brother. That’s the power of the gospel! Maryland/Delaware Baptists, that’s who we are.”

Amid the world’s problems, issues, political polarization, debating, and no absolute truth — Rainey said it is only the blood of Jesus that can unite us.

The final speaker was Richard Pope, the pastor of Canvas Church, Salisbury, Md. The 25-year-old church planter shares openly that he has terminal cancer and is struggling through significant pain but pressing on.

Referring to Jesus’ crucifixion, Pope said He was mocked and beaten for a purpose. Suffering submitted to God produces something that is good. “We know all things work together for good. Cancer is not good, but God works that thing in my life, that piece of the puzzle that’s dark, in a grander masterpiece. The problem is when you build a puzzle and stare at the piece that’s all black, you never see the whole picture. That piece of the picture is not your identity. Your suffering is more than your darker piece when you submit it to Christ,” Pope said.

“How wonderful and beautiful that He doesn’t just relieve my suffering like I often pray and ask Him to, but in my moment of need, He enters my suffering and resides there with me. We see suffering as a problem, but what if it’s part of our sanctification? What if suffering is a process that produces something far greater than you could ever have produced? I would never give myself cancer. I would never allow my wife to stand up here and talk about not knowing whether her husband would be next to her someday. I would never do that, but I’m not a good artist. I pastor a church named Canvas, and I can’t paint anything. But there is a God far greater than me who literally can work these things together. No matter how we study, or we try, we can never fully understand the horrible suffering of Christ. We cannot ever suffer without Him fully understanding our suffering.”

Sharon Mager serves with the Baptist Convention of Maryland/Delaware as a communications specialist and editor of BaptistLIFEonline.